Startups face a number of challenges when embarking on their entrepreneurial journey – according to NASSCOM data, the standard mortality rate is around 25%.

In 2015, about 140 startups shut shop in India; in 2016, about 212 startups closed doors—50% higher than the previous year; the rate for 2017 planed out to 25% as large-scale startup hubs, accelerators, and investors cropped up across the country. To help the sector, government went to the extent of redefining the meaning of a “startup” by raising the age limit to 7 years from the date of incorporation (10 years for Biotech firms). From linking villages with the Start-up India programme to mega-sized accelerators and spirited investors, a slew of regulatory changes, activities and initiatives helped the startup sector emerge as the next big theme for economic growth.

Today, India is among the top five countries in the world in terms of startups. Its consumer demographics and extensive urbanisation continues to channel large-scale investment opportunities. The number of tech and non-tech startups cropping up every year only continues to the rise, irrespective of the shutdowns. It is projected that by 2020 there will be over 12,000 startups in the country, changing the way the markets are perceived and work. Until 2016, it was a trend among investors to make an early entry, even before the start of a firm. However, 2018 started on a bleak note with the causality list taking on a more serious turn: a Hong Kong-based tech startup accelerator, Jaarvis, started writing off investments in its portfolio and shutting down its India operations. Other startup accelerators in India are not doing good as well and are taking parting shots in getting their business model right. All this begs the question: Is there a market for all these startups?

According to an analysis report of startup postmortems, the first and topmost reason for startup mortality was ‘a lack of market need’ for it. Most failed startups relied on perceived solutions to implied needs. Market research was comfortably ignored, placing the onus on VCs to do the due diligence. For many startups, obtaining the seed fund was an end in itself. As seven out of ten well-funded startups failed, it also debunked a major myth; Scalability. Most of the high profile startups that shut down shop grew too fast and expanded even faster, so scalability to meet the demand was not the problem. Soon, the reality struck.

India’s vast unorganised market was a logistical nightmare to even companies having a strong network and financial backing. High smartphone penetration seems to incorrectly warrant more tech solutions. However, tech solutions were considered low-risk by investors, only to have them make a hasty retreat within a year or two.

As Prime Minister Modi’s “Startup India” is nearing completion of two years, startups are already yearning for the magic of 2015 when they savoured being the flavour of the season, which saw the emergence of a number of home-grown unicorns across the country. However, a new class of investors are stepping in to bring about the turnaround. For instance, organisations such as Tata Trust are planning to help startups in India that are categorised as high-risk and have uncertain business models. This is a space where no angel investors or venture capitalists would put their money in. For a change, these investors are looking forward to support ideas having a social impact. As one official put it candidly – in order to have a deep and irreversible impact, one has to try different things, and not use the same approach again and again. The coming days will witness the funding companies taking the lead from the startups. But will it energise the sector? One only needs to wait and watch what 2018 holds.

Striving for the label ‘Smart City’ or ‘Knowledge City’ is no longer a simple administrative prerogative. It involves a lot more than public will for a city to build capacities and generate the momentum required to gain visibility as a ‘Knowledge City’ in the region. What can be even more demanding are the accompanying proactive measures needed to ensure that such a city retains and strengthens its prime position among the comity of knowledge cities of the world.

‘Knowledge Cities’ base their ability to create wealth depending on these three factors: (i) capability to generate ideas, (ii) exchange ideas, and (ii) influence knowledge networks. Both private and public sectors play an equal and complementary role in valuing and nurturing knowledge, supporting knowledge dissemination and discovery, and harnessing knowledge to create products and services that add value. Many developed cities around the world are now moving towards economies that are predominantly based on their knowledge capabilities. San Francisco, Singapore, Manchester, Montreal, Helsinki, Birmingham… the list goes on.

Today, each state or administrative district in every nation has a city labelled as a Knowledge City. There may be reasons for such categorisation; for instance, robust economic performance in knowledge-intensive sectors, conditions conducive to innovation and entrepreneurialism, availability of a skilled workforce, and presence of knowledge infrastructure, such as universities, libraries and laboratories. The challenges faced by each of these cities may be unique to their region, but then the connected world poses a different set of demands that every knowledge city can ill afford to ignore. Some of the demands that knowledge cities have to reckon with include:

The above unenviable set of challenges, along with a strong contention from Asian city economies, makes it worthy to observe how Melbourne strives to carve out a niche for itself and defend its position. In many ways, Melbourne’s challenges are not unlike our own Thiruvananthapuram’s, but there is one crucial aspect that makes a world of difference. Melbourne already is a burgeoning knowledge capital:  The knowledge sector contributes more than 50% its gross regional product, with the financial services industry being the largest contributor. The city’s action plan envisages different goals, roles and initiatives that help Melbourne contribute to the growth of knowledge-intensive activities. From retaining and attracting knowledge talent, firms and investment to achieving recognition of the knowledge sector’s strength and value, Melbourne’s action plan is a case study in how to deal with emerging realisations proactively. 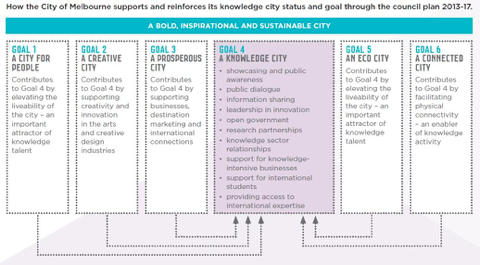 Melbourne’s holistic strategy helps in creating a flourishing knowledge economy and in building an entrepreneurial culture that can transform local economies and put it on the global map. For instance, Goal #2 focuses on Melbourne’s strong arts and culture scene, which are attractive to knowledge workers and add to the city’s liveability quotient. This focused approach enabled Melbourne to win recognition as the Most Admired Knowledge City at the Knowledge Cities World Summit (2013). Every aspect of the strategy acknowledges the importance of collaboration and partnership between the city, the knowledge sector, and the wider community.