Our vast, interconnected network of information needs to be protected and kept secure, to ensure the combined safety of individuals and governments. 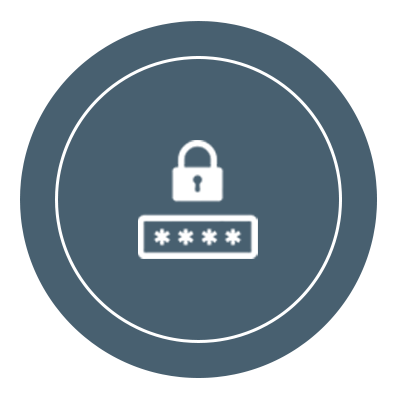 1. Password Practices
Always ensure that your passwords are complicated, to prevent it being easily deciphered by a potential threat. By choosing a password that incorporates Upper and Lower case alphabets, as well as Numbers and Special Characters, your password will be very difficult to crack.
Make sure that each password is unique and not repeated across different platforms, as it will only increase the likelihood of a threat gaining access to more than one account. Even modifying individual characters is risky as there are effective ways to decode it.
Many websites encourage you to periodically update your password, to increase the security of your account. Stay a step ahead of the game by making sure to regularly update your passwords and be free from the risk of being hacked.
Most importantly, type your password in every time instead of saving it in your browser as this is the easiest information to access from your browser data. 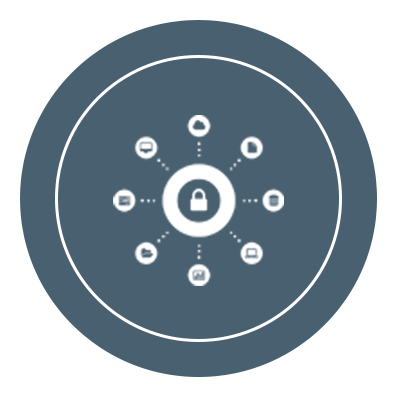 2. Tighten Your Security & Privacy Settings
Privacy Settings are a very useful tool that can be found on every major social media platform. These Privacy options are regularly updated and are often overlooked by users, as they tend to gloss over pop-ups and notifications about the same. Be more conscious of which social media accounts are linked to apps that access your data and are vulnerable to an attack.
It is important to avoid half measures and take the necessary precautions to protect yourself and your information, even if it means an additional effort on your part. A Two-Step Verification or Authentication is often suggested by social media apps and websites as a way to further your security. This is very important as
• You receive a text message or app notification with a verification code to be entered in order to access your account.
• You’ll be asked to specify your trusted device(s) to receive the code, e.g. personal Phone or Tablet, that only you have access to. 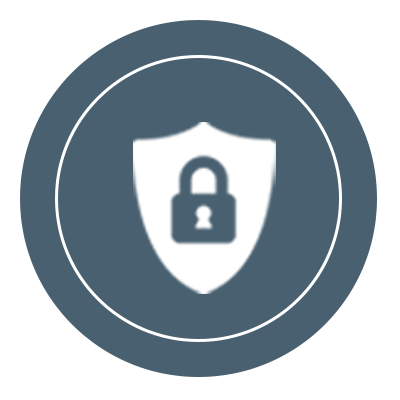 3. Security Program / Software
The minimum requirement today is a good virus protection program, as our daily browsing puts us at risk of receiving numerous viruses. Most anti-virus softwares also come with an effective Privacy measures to protect your data from harmful programs and unauthorised access.
Similar to obtaining insurance against items of value, it is necessary to take precautions to protect your digital information and sensitive data. 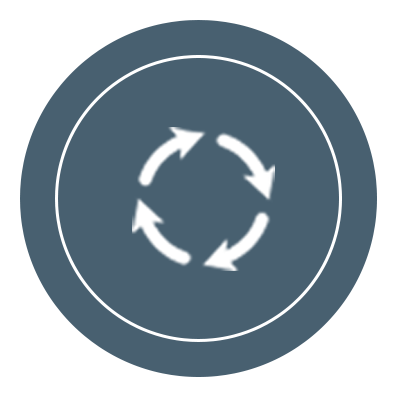 4. Regularly Install Updates
Every application, website or Operating System is regularly updated to incorporate the latest software improvements and changes. By updating when required, you are ensuring your systems are equipped to remain secure and stable in the face of potential threats.
Software updates will always include a description of what the update includes, in terms of incorporating changes and working out existing bugs and issues. If there are any mentions of Security-related fixes, ensure that you update your account / system accordingly. 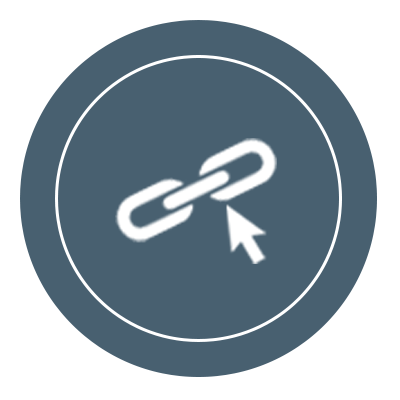 5. Never Simply Click On Any Link
Phishing is the method that tempts users to click on a flashing button / message, which is actually a malicious URL that uploads a virus to the system or attempts accessing its information. Be extremely careful and particular with any URLs that are sent by banks or other entities that could request sensitive information or personal credentials.
Also, be suspicious of messages received from unknown users via email or social media platforms, as this is the easiest way to get users to click on links or provide login details.
By being responsible and thorough, you will be protecting yourself from all cybersecurity threats more effectively than the best anti-virus softwares in the market!

We currently stand at the beginning of a new chapter in the history books, as we witness one of
India’s biggest fiscal reforms since we gained Independence; introducing GST.
Goods & Services Tax, or GST, is the Indian Govt.’s solution to the complex tax structure that has
existed for decades. The impact of this new Indirect Tax regime will be felt across the sector by all
businesses, small and large. The aim of GST is to subsume and replace existing Indirect Taxes,
such as Excise Duties, VAT, and Service Tax, and will be levied on both goods and services alike.
GST provides a wide range of benefits to the following stakeholders – 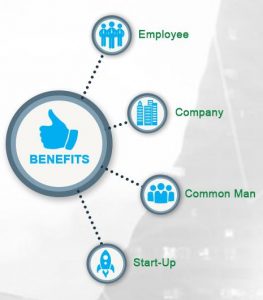 Employees
* The average salaried person will face GST on almost all of their regular expenses, right from
Food & Beverage to Entertainment.
* The rate of GST varies according to multiple factors influencing a specific sector. Employee
expenditure will either rise or fall based on the rate of GST.
* Employees will benefit from a simpler tax breakdown on their purchases, as they no longer have
to worry about multiple taxes and can simply focus on the GST charged. Instead of having to
encounter multiple different taxes, such as Entertainment Tax, Luxury Tax, Service Tax, VAT etc.,
individuals now only have to worry about GST.
* GST has no influence on Income Tax or Tax Deducted at Source, as it is an Indirect Tax.
Companies
* GST lowers the cost of doing business, as Suppliers, Manufacturers, Retailers and Wholesalers
have the opportunity to recover the GST incurred on their input costs, in the form of Tax Credits.
* Companies present in the unorganised sector will also be brought under this Tax Regime,
ensuring a more organised system.
* Exports will benefit as from GST as they are zero-rated for taxes, in order to encourage their
ability to compete in the international market. The resulting fall in manufacturing costs, on Goods
and Services, under GST will allow these Indian products to hold a competitive edge around the
world.
* GST will simplify the tax procedure for companies who no longer have to pay dozens of different
kinds of taxes, as was the case in the previous tax regime.
* Areas of business such as Consumption (Warehousing) and Logistics (movement of Heavy
Vehicles) would benefit from GST, while a positive impact will be felt due to lower Duties onConstruction material and large-scale Industrial Manufacturing.
Common Man
* The new GST regime is expected to create over 1,00,000 immediate new employment
opportunities, offering the market an overall boost and benefitting specialised roles such as
Taxation, Accounting and Data Analysis etc.
* The need for GST specialists will undoubtedly arise, creating a significant number of job
opportunities for professionals trained in GST Management, Up-gradation and Reconciliations.
* Maximum creation of new jobs will be seen in sectors with a High Demand (E-Commerce,
Logistics) and a High Profitability Rate (Cement Industry).
* Studies show that GST will lead to an overall growth of 11% in Hiring, across sectors.
* The lower tax burden from GST will ultimately translate into lower prices on consumer goods,
and the consumer will be free from the issue of cascading taxes.
Startup
* The implementation of GST has the potential to successfully integrate the Indian economy and
establish a common national market.
* GST is capable of uniting the entire Indian market, which will lead to lower business costs.
* GST will reduce numerous transaction costs, thereby lowering the overall cost of business.
* Export-oriented businesses will benefit greatly as GST is not applied on exported goods and
services.
* A huge advantage of GST is its ability to even out the tax structures of various states, and
remove the location bias that currently exists. This allows companies to establish factories,
premises in their preferred locations, with no hesitation about the potential taxes faced by them.
* The introduction of GST helps detach the question of taxes from your investment decision,
allowing even undeveloped locations to attract new businesses and investment.
* Digital Services will have the opportunity to thrive in a market free from multiple levies.
GST Impact on Income Tax
* Indirect Tax includes all the Goods and Services which we use in our daily lives, whereas Direct
Tax is paid on your annual income. As it is strictly an Indirect Tax, GST has no influence on
Income Tax or Tax Deducted at Source.
* Proprietor Companies will be affected by GST, if not registered, as all income will be calculated
as income of the Owner. 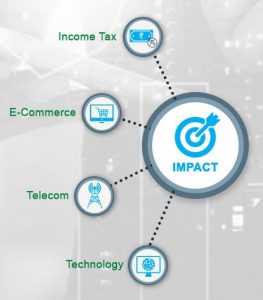 GST Impact on E-Commerce
* GST will encourage the free movement and supply of goods in every part of the country, in the
form of a single, unified market across India, and will increase efficiency in product costs by
eliminating the cascading effect of taxes on customers.
GST Impact on Telecoms
* GST will provide Handset makers with an increased ease of doing business, as there will be no
need to set up warehouses in each State. The reduction in Handset prices will also allow
Manufacturers to afford more cost benefits to consumers, thanks to warehouse consolidation and
efficient inventory management.
GST Impact on Technology
* Through GST, the elimination of multiple levies will benefit the IT sector greatly by allowing a
deeper penetration of Digital Services.
GST has caused an – 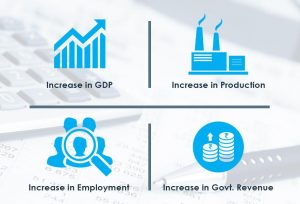 • Increase in GDP
• Increase in Production
• Increase in Employment
• Increase in Govt. Revenue
[CONCLUSION]
The general public stands to greatly benefit from GST, and the notion of ‘One Tax, One India’.
Overall, the positive impact of GST will ensure access to goods and services, at competitive and
affordable rates, and will improve the quality life of every Indian citizen.